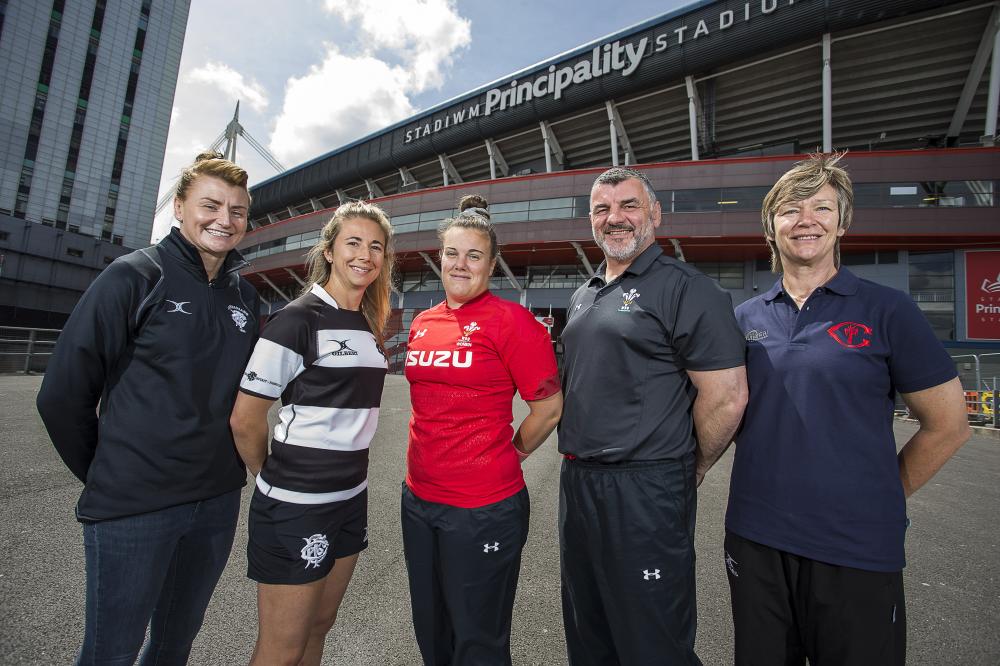 Rachel Taylor can now add a coaching role with the Barbarians to her rugby career, after being announced as forwards coach for the upcoming game against Wales.

On Saturday 23 November they will play a first female Crawshay’s side followed by the eagerly awaited double-header fixture against the Barbarians at Principality Stadium (November 30).

Two former Wales Women captains Rachel Taylor and Liza Burgess have been handed coaching roles for the Barbarians and Crawshay's respectively. The pair, who have 129 Wales caps between them, will link up as Crawshay’s coaches before Taylor takes over from Burgess as Women’s Barbarians forwards coach for this match.

Wales Women will kick off their international season with an away fixture against Spain on November 2 with two further away matches set to be announced for November.

Phillips believes it’s time for the side to improve its consistency and winning mentality with the Women’s Rugby World Cup in two years’ time (New Zealand 2021) and feels this autumn programme will help achieve those aims.

“We showed improvement last season, both in the autumn and Six Nations. England and France are still ahead of the rest of us but we’ll take our final Six Nations performance against Ireland into the autumn and look to build consistency and winning mentality. This autumn programme is a great opportunity to continue our development as a team, not only in Wales but away from home too.”

The Barbarians launched a women’s side back in 2017 and have had significant Welsh representation each time the side has taken to the field but this will be the first time Wales Women face the famous side black and white hoops.

Alisha Butchers, Jasmine Joyce and Elinor Snowsill played in the side’s thrilling 34-33 win over USA in April, Joyce scoring four tries and Joyce and Snowsill were again on the starting XV in the 40-14 loss to England last weekend.

Wales Women head coach Rowland Phillips said, “Playing the Barbarians for the first time in a double header at Principality Stadium is a huge statement of intent for women’s rugby in Wales.

“It’s a fantastic opportunity to showcase our game and shows how women’s rugby is moving forward.
“We saw the quality of the BaaBaas’ side in their recent matches against USA and England and they will no doubt bring a formidable outfit to the home of Welsh rugby in November. They have a historical tradition of playing an open, entertaining brand of rugby which will produce an exciting match to watch and be part of.

“It has been a huge honour to have three current Wales players – Elinor Snowsill, Jazz Joyce and Alisha Butchers involved in the Barbarians’ first two international games. All three made an excellent contribution to the club.

Rachel Taylor said, “It’s a massive honour to be invited to join the ranks of the Barbarians, be it as player or coach. I finished my playing career playing for them which was really special and I’ve kept in touch with a lot of players and coaches.

“I learned a lot from Giselle Mather and the rest of the female coaching team last year and it wil be the same again with Jo Yapp I’m sure.

“You can’t get a better role model than Liza Burgess. She has done everything that can be done as a player and is now a real driver for women to take up coaching, I’m still at the start of my coaching journey and has encouraged me so much already. She’s a trailblazer – I’ve seen her doing these things which gives me confidence to do them too.”

Taylor is looking forward to linking up with Burgess for the historic Crawshay’s fixture. “There’s a big tradition of Crawshay’s rugby in Wales and I hope I can help convey that meaning to the players.

“We hope to get some international players involved but we area also aiming to involve club and regional players in Wales who have done a lot for the domestic game.”

Rowland Philips added, “The fact that Crawshay’s have set up a women’s side is another sign that the profile of female game has grown and we’re proud to play in this historic first women’s fixture.

“Crawshay’s is a well-known rugby brand, an invitational side to be proud to represent as a player, as I know first hand.”

“We are looking forward to the first fixture against Spain who are rapidly developing as a rugby nation. They beat South Africa and Scotland last season and have a good chance of qualifying for the 2021 Rugby World Cup. We certainly won’t be under-estimating them in our first game.”

Wales have already qualified for the Rugby World Cup through their position in the 2017 edition.

Ahead of the international season, the Wales Women coaches, in conjunction with the regional community teams will again run a pre-season training and playing programme to underpin the international game. Registration for the Women’s Regional programme is now open for what Phillips insists is the best possible way to prepare for regional and international rugby.

“I would encourage any player with aspirations of playing senior regional rugby, and ambitions to represent Wales Women to sign up for the programme,” added the former dual international.

“Not only did the programme benefit us nationally, it helped all participating players – in terms of fitness, skills and tactical abilities.

“We would encourage all players who have progressed through the under 18 pathway to put their names down along with club players either in Wales or Welsh qualified players from outside Wales who haven’t been part of the programme previously."

Pre-season starts next month with an intensive conditioning and skills programme run by national and regional coaches and managed by the regional community teams. Cardiff Blues, Ospreys, RGC and Scarlets will then play each other in the regional championship over three weekends in August, while there will be a development playing programme in place for the Dragons region.

Phillips said, “As coaches we have identified a number of talented players coming through the Dragons U18 pathway but without a Premiership club in the region currently to sustain a competitive player base, we feel it’s important to run a transition programme this season to develop those players for the future. Where appropriate, senior Dragons players will be invited to play for another region for this season only.”